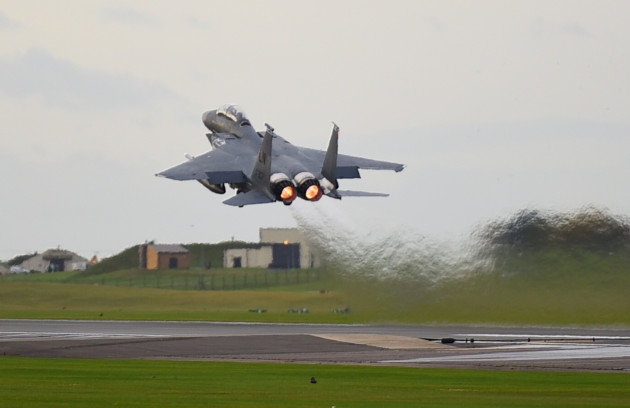 USC are delighted to announce that we have recently started an energy saving lighting contract at RAF Lakenheath. The project, which began in July 2017, will see our team of experienced Electrical Engineer’s install a new LED Lighting system, replacing the old and energy hungry Hi-Bay warehouse lighting currently in situ.

This is a prestigious contract to work on, as the U.S. Air Forces only European F-15 fighter wing, RAF Lakenheath, based in Suffolk, provides unique air combat capabilities within the UK, Europe and beyond. Although an RAF station, it hosts United States Air Force units and personnel and operates on a 24 hour, 7 day a week schedule.

The LED solution we are providing will offer a low energy efficient light source, some of the well-designed LED products we will be using can boast a lifetime in excess of 50,000 hours to 70% lumen maintenance. LEDs represent an incredible, fast moving and game changing technology within the lighting industry and have progressed hugely from their original use as car indicator lamps!

In partnership with our suppliers, Luxonic, USC have managed to procure a cost effective wireless control solution which will create long-term cost savings through individual presence controls at each fitting and Daylight harvesting technology to increase the payback period, whilst assisting the facility with their environmental obligations.

In summary, the benefits of LED lighting includes:

The facility will also see major cost reductions in terms of the ongoing repairs and maintenance, allowing the facility to focus on its core objectives of security and defense.

As RAF Lakenheath operates constantly through the year, it, our Project Manager has had to work closely with the onsite team to ensure operations are not affected during the installation.   All of our Engineers are receive the relevant training to work in such a secure and high profile environment.